How Much Does A Onewheel Weigh? 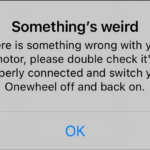 They described it as a “voluntary recall” for the front footpad of the Onewheel GT due to a failure to disengage after the rider dismounts while the board is in motion.

You can read the official recall notice here.

On that same site you can also enter your serial number and find out if you qualify to get a free front footpad replacement.

Future Motion reported just over 800 accounts of ghosting due to footpad failure issues, including a few twisted ankles, burns and bruises.

While this isn’t a great scenario for those who experienced ghosting (I never did personally) I do think this is a good move for a few reasons.

I just submitted my recall claim and within a few seconds I got a confirmation email saying my new footpad is on the way.

They did make me agree to disposing of the old footpad right away, which I agreed to because… what else am I gonna do with it?

All in all I think this is a good PR move and an important way for Future Motion to build trust with the community.

If you want to see and interesting convo between Jack Doerksen (CEO of Future Motion and Onewheel Founder) and Kyle Mudd (Chief Evangelist) I’ll add their most recent convo here too.